I made a small and casual experimenting with this additive and thought you might be interested in the results.

It all started because the lye calculator that I use (Lyecalc.com) displayed suggested amounts of it for my recipes, which made me look it up.  It turns out it is a “chelating agent” which means it binds up metal particles.  More detailed explanation here.  Learning the word chelator, chelating, etc, made it easy to understand some episodes of House whenever they had a patient with metal poisoning.  But that is besides the point.

What does it do?

My experiment explored the latter, since thank God I have never had DOS on my soap  (knock on wood!).  However, that can be explained because my recipes have a high content of saturated fats (tallow, coconut oil, shea butter) and DOS is most common in non saturated oils (the ones that stay liquid, olive oil, rice bran oil, etc) since they oxidize faster.

It consisted basically of using two soaps to wash my hands twice a day.  (I wash my hands like  100 times a day, but only twice at the sink by my bedroom.)  I did that for about a week the first time and the results were visibly evident:  (the dark brown soap did not have Tetrasodium EDTA and the pinkish one did.)  They were made around the same time, and had cured for about two months. 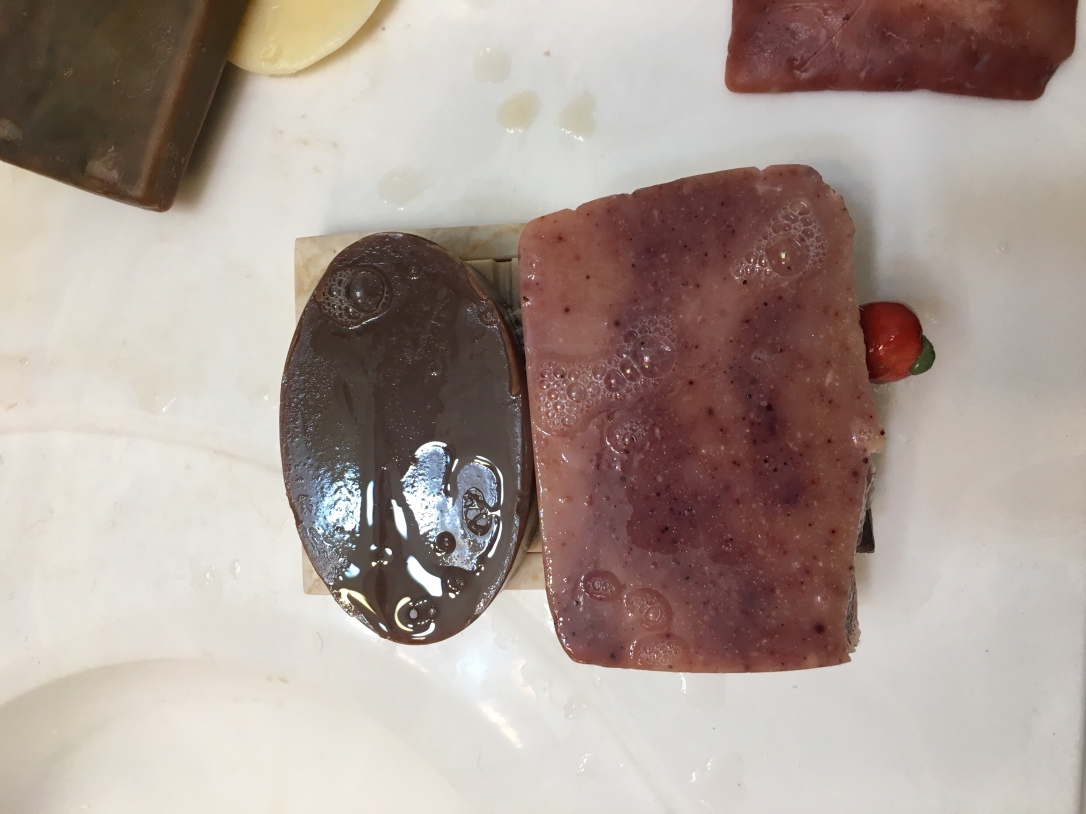 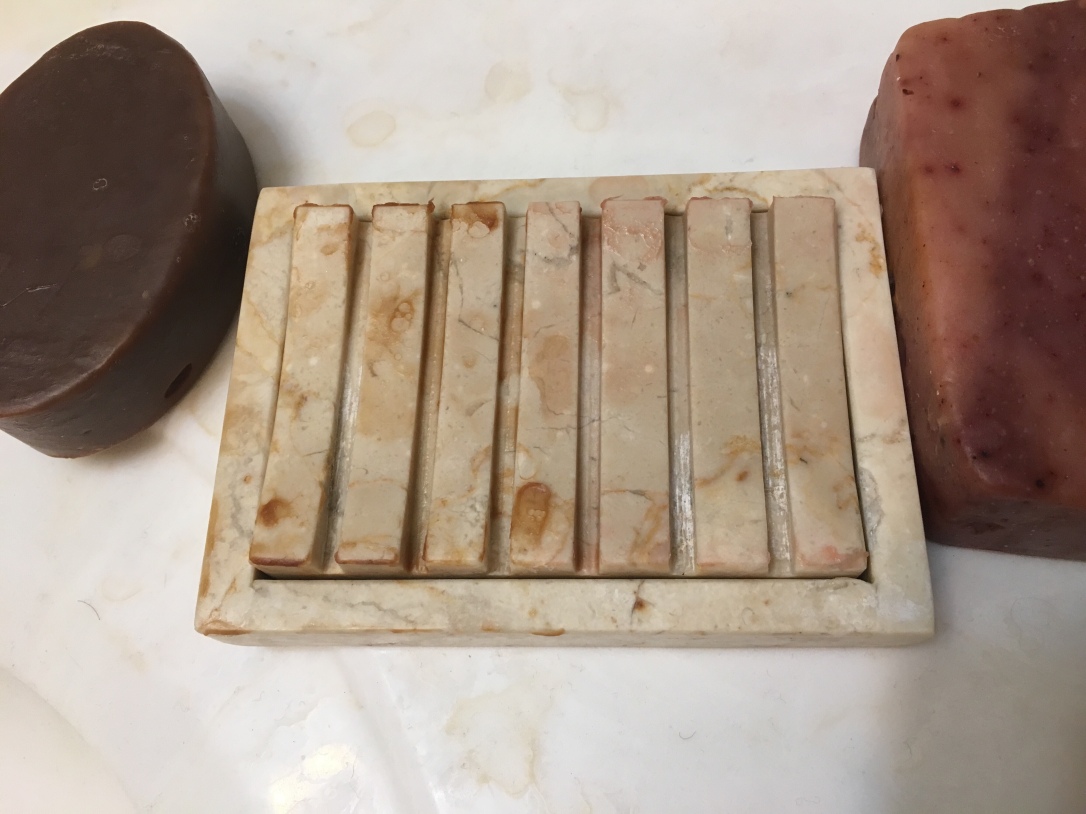 I decided it was not fair to the brown soap to be compared with a lighter colored soap, so I looked for a similar tone soap in my curing rack (where soaps stay until I need them).  The closest one was the peach soap.  Which had cured (sat on the rack) for about 6 months.  After 10 days, this is what I had:

The results were less visibly obvious.  So I had to get tactile.  I could feel the soap scum was thicker on the peach soap side, vs the pinkish soap.

I then rinsed the soap dish in water to see which side would get cleaner from plain contact with water without any scrubbing.  And pinkish soap won again, the side where it had rested was smoother and has less residue than the side with the peach soap.  So my deduction is that cleaning the shower would be easier if I add EDTA to my soaps, since I live in a hard water area and do not have a water softener.

If you want to watch the experiment in video, click here.

Since I do not get DOS with my soaps (and I have some toddler soaps -they are 2 year old), I looked for an experiment done for that purpose.  It is a bit scientificky, but an actual easy read.  You can read it here.  And here is a shorter version.

Basically, he proved it works to reduce DOS, and suggests it works even better in combination with ROE (Rosemary Oleoresin, which I bought at Wholesale Supplies but have not tried it)

How to use it, where to get it

If you want to try it yourself. these are the two places where I have bought it:

Make Your Own (Aff link)

EDTA is also use to help the preservative (if used in lotions, in which case you use Disodium EDTA).  For that, the usage rate is 0.10%.

In Kevin Dunn experiments, he used it at a 0.10% rate based on the oil weight.

In a soap making forum, I found the suggested usage rate went up to 0.50% of the total batch.  Based on the experience of other soap makers.

The lye calculator I use already includes the suggested amount, so I follow that.  Here is a sample recipe where you can see it.

Just a few days before this blog going live, I learned that there is an alternative that is better for the environment, as there concerns about it.

This came up in a forum thread which can be read here.

The alternative is GLDA and it can be purchased here.

I am originally from El Salvador, I have lived in The States for about 20 years, and I admire and also enjoy creating artistic items. View all posts by soapsbyglenda

Getting fall soaps ready. This one is scented with apple caramel crunch.
Made some bees with soap dough for a oatmeal, milk and honey soap...the wings were made with transparent soap.
This fire soap was inspired in The Library Book. Scented with orange spice, the video of the making is now in youtube, link to channel in bio.
This was a continuation to the Little Prince soap, this time it is all about the fox, perhaps my favorite character in the story.
Inspired in the Grand Prismatic, I made this soap with the Dutch pour technique borrowed from the painting world. Video of the making is now live, channel link in bio
My attempt at the Tall and Skinny Shimmy technique, achieved in only two out of four soaps. I liked the fragrance on these, Yuzu from Elements Bath and Body